My first exposure to chemical warfare came when I was in the US Army undergoing Basic Training at Ft. Leonard Wood, Missouri back in the early 1980s. After being instructed on various aspects of defense against chemical agents, to include use and maintenance of you personal gas mask, we were taken to the gas chamber for familiarization and to see if we had been paying attention- the Army termed it a “mask confidence exercise”. We sent in a squad at a time into a small shed filled with CS (tear) gas. We were wearing our masks and everything seem to be fine. Then we were instructed to remove our masks and recite our names and social security numbers- a method to ensure that we were not holding our breath.

Needless to say, inhaling CS gas was not particularly pleasant…the first feeling I had was as if someone had put a cork in my air passage so I couldn’t breathe. It was pure torture and I could barely recite my name and social security number without gagging uncontrollably. Like everyone else, my first inclination was to bolt from the room but we’d been warned by the Drill Sergeants that if anyone bolted, the entire squad would have to repeat the exercise. After what seemed an eternity (more like 15 minutes or so), we were ordered to leave the room, marching out in a single file line. It was Winter at Ft. Leonard Wood and it must have been in the teens outside with the wind chill. As soon as it hit my face, my face felt as if the skin was being pulled off, strip by strip. Somehow the cold and the CS interacted to make things even more miserable.

And this was only CS gas, I thought. Nerve or Mustard gas must be far worse…

As they say, it was a real learning experience that day and to this day, some 35 years later, I have never forgotten it. Which brings me to the topic of this post- German gas masks.

With the deadlock of the trenches on the Western Front, and to a lesser extent on the Eastern Front, various methods were devised in an effort to achieve a breakthrough. One of those ideas was to use some sort of toxic gas to either kill or otherwise incapacitate the defenders so that the attackers could make a successful penetration of the defender’s front line at an acceptable cost in casualties. The first full scale chemical attack was made by the Germans at the Second Battle of Ypres on April 22, 1915 with the use of Chlorine gas (I’ve gotten a taste of this when working in a verterinary hospital and cleaning cages with chlorine bleach- the vapors would become concentrated and if you weren’t careful, you would breath it in. One of the lasting effects is that you would lose your tense of smell and taste for a few hours).

At the Battle of Second Ypres, the immediate results were devastating and had the Germans been prepared to launch a full-on offensive, it was possible that they could have dislocated the Allied front in Belgium. In response, the Allies started developing weapons and defenses of their own and it was a race of sorts for each side to develop increasingly deadly and effective chemical agents and the defenses that went along with them. The Germans were a leader in this area and in 1915 they developed a practical protective mask nicknamed the “Gummimaske.”

The above two pictures are of the first and second model “Gummimaske“(the generic name people used for this variety of mask). On the left is an early 1915 pattern Gummimaske introduced late in 1915 and widely issued by January 1916 and this specific model is referred to as Bandmaske. On the right is the improved Rahmenmaske introduced during the spring or early summer of 1916. The fit was improved due to the addition of a strap across the top of the forehead and a more rigid frame (Rahmen means frame in German). The mask and filter plate were reduced in size to ensure that less exhaled air would build up inside the mask. Note that the eye pieces are a bit lower on the improved mask on the right. 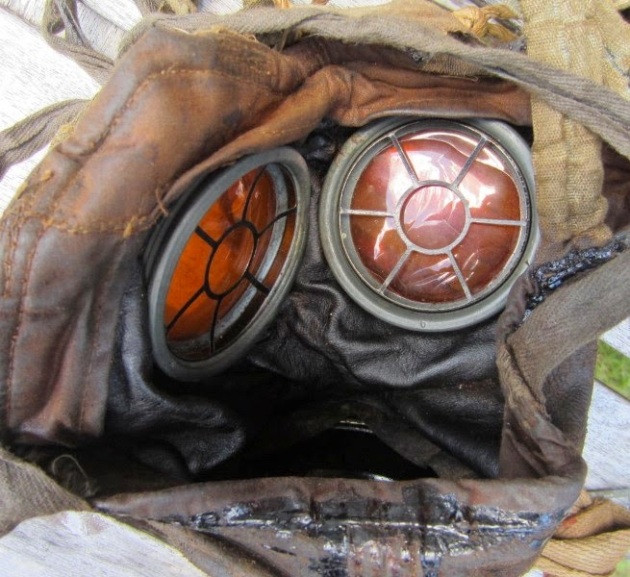 Interior of Ledermaske- Note the interior eye lens inserts. The were made of treated cellulose and intended to prevent the mask lenses from fogging up. These lens inserts could be changed in the field, unlike the ones for the Gummimaske. 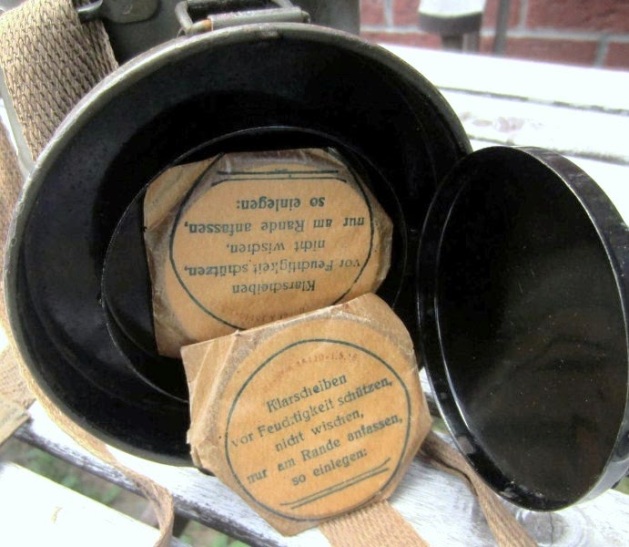 Additional lens inserts- These were stored in a small compartment underneath the top of the storage cannister. 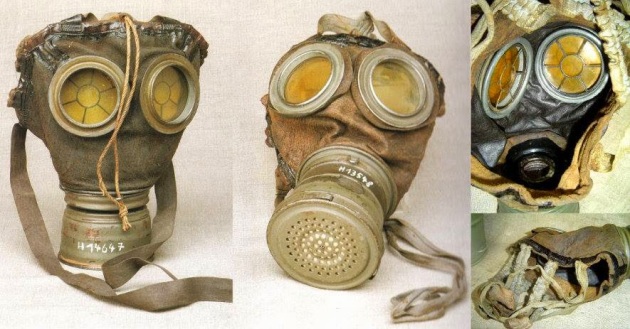 Two examples of the Ledermaske with interior views. 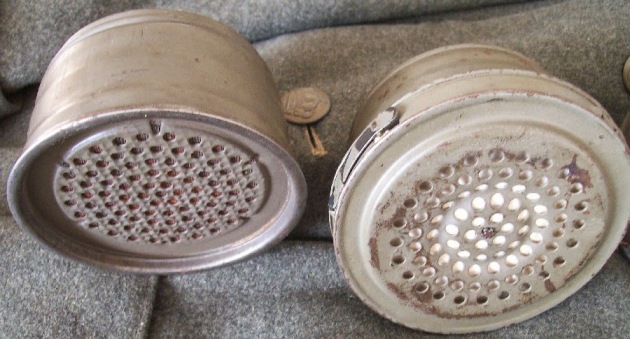 In mid 1917 or mid 1918 (sources vary) the Germans introduced a snap-on filter attachment designed to counteract the effects of diphenylchlorarsine aka Blue Cross. The filter on the right has this attachment. 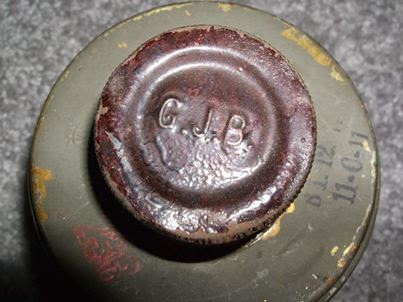 Fresh Filter – Top View. A filter was designed to last up to three hours with constant exposure.

The above pictures provide a good introduction to the basic gas masks and accessories that were issued to the German soldier during the First World War. There were some additional models that were issued for specific tasks but for our purposes, they are irrelevant.

Below are some more illustrations of the mask and filter: 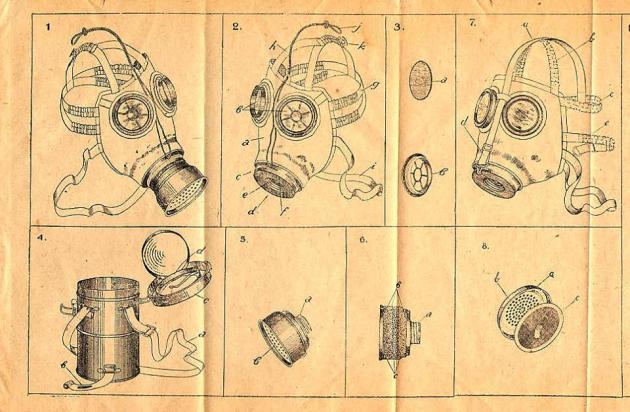 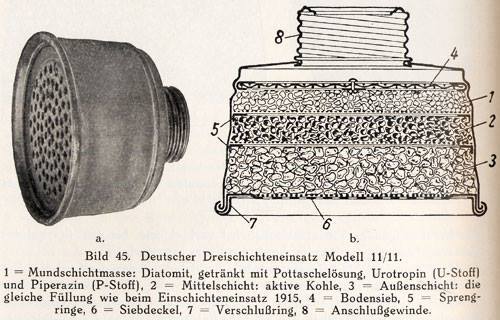 Schematic Diagram of the Filter. These were supposed to last for roughly three hours, although it could be shorter with heavy concentrations.

The gas mask was essential piece of personal equipment and it was never far away from the soldier.