The Zeltbahn or shelter half was issued to every German soldier (well, it took until late 1914 to issue them to cavalry) and as such, it’s an item that ALL unit members should have. Typically, two Zeltbahns were buttoned together to form a small tend in much the same way as was the practice in the US Army. However, often two, three, four, or more were buttoned together to make an expanded shelter and these were nicknamed “Boars’ Nests”. While we mostly occupy trenches where the proper use of Zeltbahns are limited, we should all know how to set them up as tents.

Originally, these came in a yellow ochre color but in 1915, the color was officially changed to grey (although the yellow ochre variety were issued until the supply was exhausted).Also, just as importantly, Zeltbahns were also used as ponchos (albeit, not great ones) and that’s something we should also work on for living history purposes. Unlike the Allies, the Germans had very little in the way of rain protection except for the Zeltbahn.

One of the problems with reproduction Zeltbahns is that their sizes often vary by manufacturer to the point where it’s impossible to button them together. Also, some manufacturers use material that’s way too thick- this is an item that was meant to be carried, they can’t be heavy.

Diagram of the 1892 pattern Zeltbahn and kit consisting of stakes, poles, rope, and case.

The Zeltbahn Kit – Each soldier was issued three stakes and three pole sections. The stakes are the 1901 pattern.

The Zeltbahn rope – Each soldier was issued one of these. The “Zeltleine 92” was 2 meters long, the “Halsleine 92” (the shorter one if you carry it as poncho) was 90 cm long.

Wartime issue Zeltbahn – In 1915, the color was changed from an yellow ochre to grey.

Detail of cord- These were for use in conjunction with the stakes. 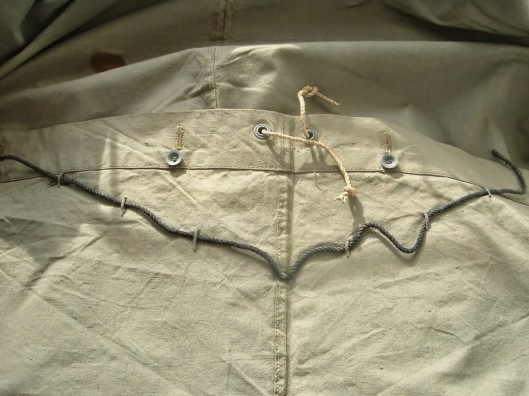 Detail with cord used when the Zeltbahn was used as a poncho. Rope for wearing it as a poncho or “Halsleine 92” was 90 cm long.

Detail of poncho cord- Note the stitching used as loops to hold the cord.